Residential LED Light Replacement in Victoria: All You Need to Know

Home » Blog » Residential LED Light Replacement in Victoria: All You Need to Know

The lighting industry has come a long way, and bulbs and tubes in the house have transformed copiously since Edison’s incandescent light bulb. LED light bulbs and tubes are the latest electric illuminators making inroads into our homes. Today, the industry is at such a standpoint where there are more LED lighting variants available than we have seen for any other lighting alternative out there. This has left an average homeowner guessing which variant, type, size or wattage fixture they should install at home. This guide here will try to answer all possible questions related to residential LED light replacement – requirement, benefits, and choice of products for different areas in your residence.

LEDs have swayed the conventional lighting industry in a variety of ways – owning to an assortment of reasons – including their long, really long lifespan, reduced energy consumption, and very low maintenance.

LEDs essentially took a while to kick off, largely because of their price, which was higher than what we were used to paying for incandescent and CFL lights. Over the years, as purchase prices of the LED fixtures continue to fall (to make its market footing stronger), more and more households have and are constantly looking to upgrade their lighting systems with LEDs.

The light fixtures in households are the biggest energy consumers, for a perspective, they are responsible for over 40 percent of the average household energy bills. There is no denying that appliances such as TV, fridge, washing machine, etc., also consume generously to the energy bills. Like you have begun to switch to low energy consuming LED TVs and Energy Star rating refrigerators, it’s equally imperative to make LED lights a part of your home.

LEDs, in addition to the acknowledged benefits of long life and less energy consumption also look impressive at home. The LEDs don’t have to look like the traditional light bulbs and companies are ensuring they don’t. LED light comes in various shapes, sizes, and forms, leaving homeowners with endless possibilities in which they can use light solutions at home.

Residential LED Upgrade in Victoria under the VEU Program

Many developed countries including Australia are looking at ways to reduce the carbon footprints of its citizens. In the process, the Australian government is seeking to explore new ways to reduce energy usage, power bills, and greenhouse emission by households in the country through its Victorian Energy Upgrades (VEU)rebate scheme.

VEU is the country’s energy-saving rebate program, which was previously known as Victorian Energy Efficiency Target (VEET). Under the program, Victorian households are provided with discounted energy-efficient products and upgrades by accredited service providers, which include replacement of incandescent, CFL & halogen bulbs with energy-saving LED bulbs. 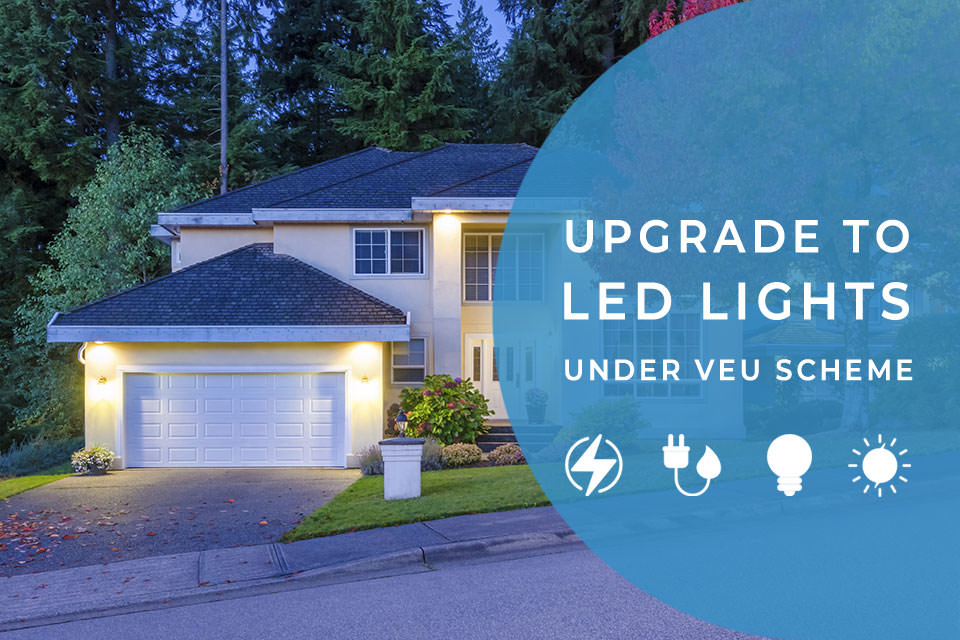 Why Should you go for Bulb Replacement?

Over the last decade or so, LED bulbs have become a gold standard in home lighting sphere, particularly because they are more superior to the halogen bulbs and CFL lights we are accustomed to.

If you have your house stuffed with yellow halogen light bulbs that give only 30 percent light off their capacity, its time you switch to more cost-effective, bright white LED halogen bulbs and save on electricity consumption big time.

Things to Consider when Upgrading to LEDs under VEU

Here is a checklist of what you need to ensure when going for an LED upgrade:

In the previous paragraphs, we have touched upon some of the advantages of the LED lights, here are the most important benefits of LED lights in detail:

As discussed before, LED fixtures are far more cost-effective and energy-efficient as compared to halogens. The cost of running a bulb is ideally calculated by the number of watts it consumes while it runs continuously for an hour. Where halogen lights can consume anywhere between 35-200 watts per hour, the LED lights can emit the same amount of light consuming only 7-20 watts per hour.

Most people argue that LEDs have almost 5 times the heads up cost as compared with halogen light. That’s true, but considering longevity and energy savings LEDs offer over their lifetime makes them way more cost-effective. Halogen lights have an estimated lifespan of about 1000-2000 hours whereas LED lights generally last up to 50,000 hours – there you can make the difference for yourself.

Traditional halogen, as informed, generate light by producing heat, adding extra degrees to the room temperature. Sometimes, overheating of these bulbs have been responsible for household fire hazards.LED lights create bright white light sans extra heat, which means they are cool to touch even after long use hours. Additionally, LED lights emit light in one focused direction, which makes these lights ideal for reading or in whereas where task lighting is required.